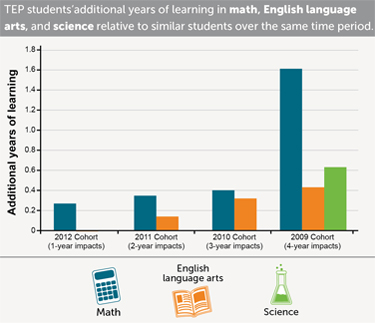 Mathematica found that by the end of the 2012–2013 school year, TEP’s impacts on student achievement were consistently positive across subjects and cohorts, with especially large effects in math. Using benchmarks for average annual learning gains, the research team found that, compared to similar students in comparable New York City public schools, students who attended TEP for four years had test score gains equal to an additional 1.6 years of school in math, an additional 0.4 years of school in English language arts, and an additional 0.6 years of school in science. Using another relevant benchmark, TEP’s cumulative effect on student achievement over four years is approximately equivalent to 78% of the Hispanic-white achievement gap in math, 17% of the Hispanic-white gap in English language arts, and 25% of the Hispanic-white gap in science.

How Do Parents Evaluate and Select Schools? Evidence From a Survey Experiment

Impacts of Uncommon Schools in a Turnaround Setting

Interested in the most current findings from Mathematica? Subscribe to our bi-weekly newsletter, Evidence & Insights, to stay up to date with the issues that matter to you.